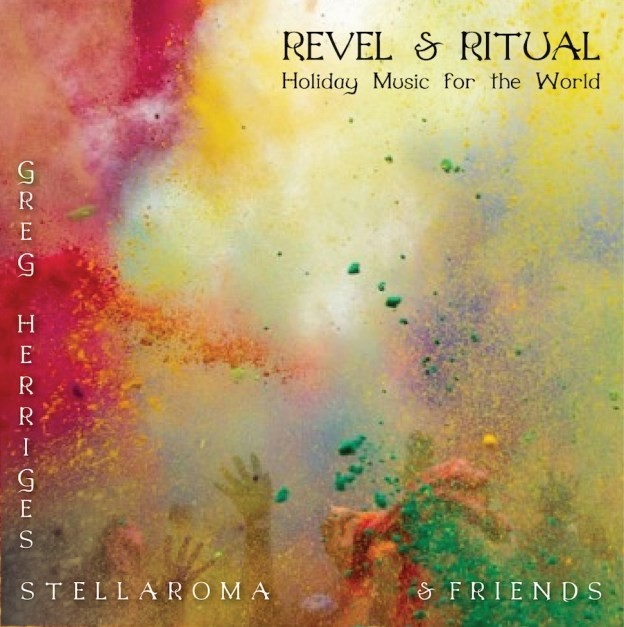 We have had the great honor and privilege to review the latest release by Greg Herriges, “Revel & Ritual: Holiday Music for the World”. It is an eclectic look at music from around the world, crossing continents and genres to create a wonderful album which has something for everyone.

The album is a collection of traditional and original music for the holidays. It is extremely special because it is music for holidays of many faiths, places, and seasons, including Hanukkah, Holi, Ashura, Chinese and Ukrainian New Year, Sakura Matsuri, Basque and Catalan Christmas carols, and the Winter Solstice to name but a few!

The album opens with the track, ‘Birjina Gaztetto Bat Zegoen’ which is primarily about a Basque Christian song. First, we hear a skillful guitar/sitar opening which is followed but percussion and staccato rhythm which gives the song texture. There is an Asian influence to the piece, impressive finger picking on the guitar and djembe beat. It all works together in harmony throughout and is an impressive opening track.

We adored the song, ‘Sakura Sakura’. It is a magical track which opens to the sound of harmonics being plucked on a guitar. dissonant sounding notes ring out with clashing chords which make for an uneasy feeling at times but always resolves itself eventually. The composition and arrangements marry together extremely well. The song is different from anything we have heard up until this point, making for surprising and unexpected turns.

‘Sevivon Sov Sov Sov’ is another exceptional track. It has a Russian feel which is aided by the marching snare drums. They, in turn, echo the staccato rhythm. The song gets faster as it marches along until the end where it slows right down again. This constant change in tempo adds further layers of depth and interest to the song. You can feel Herriges having fun with the piece, he plays with the listener in the most welcomed way.

‘Foom, Foom, Foom’ has an acoustic ragtime feel to it. The root and 5th bass line drive the song along while the rest of the thoroughly impressive musicianship can be digested and enjoyed. Simply magical.

The closing track is called, ’Shchedryk’. It is an impressive 8 minutes in length and we hear a more traditional western Christmas melody but with a few surprises along the way! The bass line shines here as do the layers of growing harmonies and vocals. There is an abrupt ending leaving the listener wanting more! What a tease!

‘Revel & Ritual: Holiday Music for the World’ is world music at its very best. The arrangements are innovative and cross-cultural throughout. The skill and talent Herriges has are here to be enjoyed in abundance. This album is destined to be enjoyed at any time of the year, so make sure you check it out today!