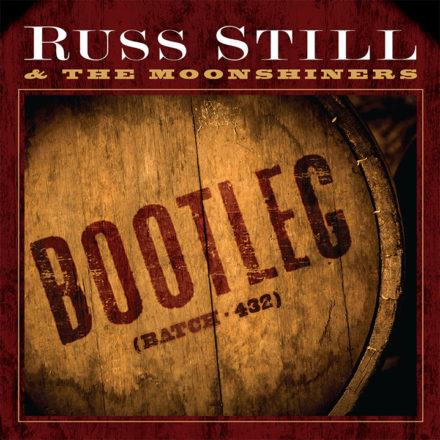 Russ Still & The Moonshiners have released their latest album ‘Bootleg (Batch 432)’. The eight-track album is the 5th released by the band based in Atlanta, Georgia. The band is comprised of frontman Russ Still (vocals, guitar), Cam Still (keys), Ben Still (guitar, vocals), Ed Usher (bass, vocals), Mitch Flanders (drums, vocals) and Roddey Phipps (guitar). Together they make for a formidable group which are on top of their Rock Country game.

‘Bootleg (Batch 432)’ opens with the track, ‘No Stars’, it is upbeat from the get-go. We hear, driving guitars, bass, and drums with the charismatic vocals being added as the icing on top. The song is catchy and uplifting with a bridge that takes a surprising turn. The addition of minor chords changes the feel of the song and adds to the complexity of the music.

‘Waiting’ is a more laid back offering. It is beautifully carried along by the expertly performed instrumentation. There is a juxtaposition between the music and the lyrics. The upbeat music is a backdrop for the darkness and vulnerability in the lyrics. Simply beautiful.

‘Money’ is one of our favourite tunes on this album. It features a solo electric guitar opening which is sublime. There is also an organ to be enjoyed which is filled with emotion from the beginning. The telephone effect on a part of the vocals is a nice touch and adds texture to the piece. The guitar solo features riffs, always fun and creating memorable melodies.

‘It’s Hard’ is a gorgeous song. From the solo vocal opening to the relatable storytelling of a breakup. The piano features heavily on the song and it adds a charismatic charm to a wonderful piece of music.

The high level of musicianship is in abundance on this record. Each musician has their own part which shines solo but also they all come together and work as a collective beautifully. We would highly recommend ‘Bootleg (Batch 432)’ to any music lover as it is a thoroughly enjoyable listen.

In 2015 at the Georgia Music Awards, Russ Still and The Moonshiners were crowned ‘Country Band of the Year’ and with music as strong as this album, we can see why. They take the Country Rock genre and maker a sound which is unmistakably theirs.